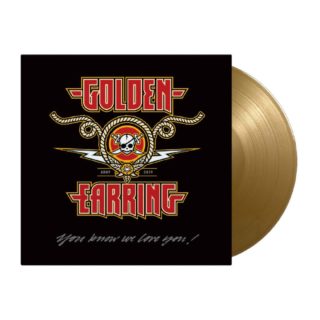 You Know We Love You!

Golden Earring’s last performance ever was held at the Rotterdam Ahoy on 16th November 2019. When in February 2021 co-founder George Kooymans had to announce his having to leave the band with immediate effect due to health issues, Golden Earring decided to break up. With the sad knowledge that the Rotterdam show had been the final performance of Golden Earring, the recordings were unshelved in close cooperation with the band, Marcel de Vré and John Sonneveld – the band’s long time technical assistance and producer. This historical release You Know We Love You! Is the result.

You Know We Love You! is the ultimate goodbye of this legendary Dutch rock band and is available as a limited edition of 5000 individually numbered copies on gold coloured vinyl. The 3LP set is housed in a deluxe trifold sleeve and the artwork based on an idea by Barry Hay features a 4-page booklet including a replica of the original concert poster. The sleeve also features a collage of photos that fans submitted during the past year