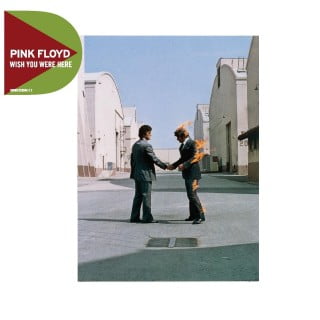 Wish You Were Here

Wish You Were Here is the ninth studio album by the English progressive rock group Pink Floyd, released in September 1975. It explores themes of absence, the music business and former band member Syd Barrett’s mental decline. Inspired by material the band composed while performing across Europe, Wish You Were Here was recorded in numerous sessions at London’s Abbey Road Studios. The premise of the album was based on a song written by the band called “Shine On You Crazy Diamond”. “Shine On” was a tribute to Barrett, who, coincidentally, made an impromptu visit to the studio while it was being recorded. It was lead writer Roger Waters’s idea to split the “Shine On” in two parts and use it to bookend the album around three new compositions, forming a new concept similar to their previous album, The Dark Side of the Moon.