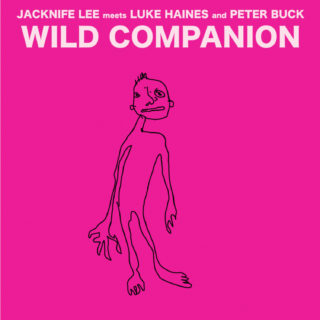 ‘Beat Poetry For Survivalists’ – the unlikely collaboration between Peter Buck and Luke Haines re- imagined and remixed in to ten dub cuts by JCKNIFE LEE. ‘Wild Companion’ is an exclusive vinyl release for Record Store Day 2022. Peter Buck was the guitarist for the biggest band in the world – REM. Luke Haines was the guitarist for The Auteurs. The Auteurs were not the biggest band in the world. They were pretty good though. Luke Haines also does paintings of Lou Reed. One day, Peter Buck bought one of Luke’s Lou Reed paintings. They had never met before but decided that the fates had brought them together and they should write some songs and make an album. ‘Beat Poetry For The Survivalist’ was that album. With songs about legendary rocket scientist and occultist Jack Parsons, The Enfield Hauntings (of 1978), a post- apocalyptic radio station that only plays Donovan records, Bigfoot, and Pol Pot. Garret “Jacknife” Lee is an Irish music producer and mixer. He has worked with a variety of artists including U2, REM, The Killers, Robbie Williams, Snow Patrol, The Hives, One Direction, Editors, and Taylor Swift. He liked the record so much he reworked and remixed it in to ten magnificent cuts of dub, bass and beats. Luke Haines and Peter Buck will be touring the UK in April 2022, including Hebden Bridge Trade’s Club and two shows at 100 Club in London.

SIDE ONE:
1. JACK PARSONS
2. APOCALYPSE BEACH
3. LAST OF THE LEGENDARY BIGFOOT HUNTERS
4. BEAT POETRY FOR THE SURVIVALIST
5. WITCH TARIFF SIDE