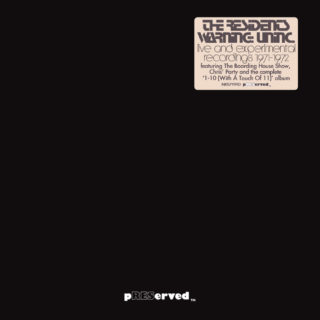 ‘THE PRE-RESIDENTS YEARS, AS EXHUMED FROM THE BAND’S EXTENSIVE MASTER TAPE ARCHIVE. DOUBLE LP SET FEATURING TWO LIVE SHOWS RECORDED IN 1971 AND 1972 PLUS THE COMPLETE ‘1-10 (WITH A TOUCH OF 11)’ ALBUM, RECORDED IN 1972 AND PREVIOUSLY ONLY RELEASED IN SHORT EXCERPTS. PRODUCED BY THE RESIDENTS AND THE CRYPTIC CORPORATION.

As they became The Residents, San Francisco’s most treasured sons (and, for all we know, daughters) produced a number of experimental tapes, and even ventured beyond their studio to perform on stage. This set captures both those live shows and a previously-unheard-in-its-entirety studio recording, ‘1-10 (With A Touch Of 11)’. Raw and unsophisticated, and deeply experimental with regards the studio material, all three recordings shine a light onto the group’s early, intrauterine period, capturing them performing together, and represents an invaluable part of their formative story. Part of the band’s ongoing pREServed series, providing an accompaniment to a collection of vinyl reissues of their better known 1970s recordings, ‘Warning: Uninc’ bears little relation to the rest of recorded music history, a pattern The Residents have continued over the 50 years since these recordings were made.