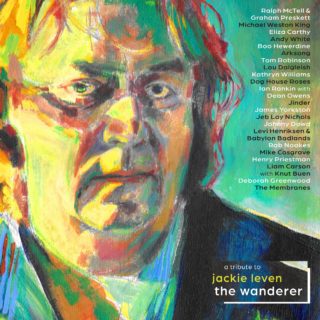 Wanderer: A Tribute To Jackie Leven

Jackie Leven is celebrated as one of the world’s most prolific and accomplished singer-songwriters. His recordings encompassed everything from folk to Celtic soul, driving rock to lyrical ballads. He passed away over 10 years ago but the legend of this uniquely talented artist grows every year as more and more people discover and celebrate his remarkable catalog of recordings.

The Wanderer: A Tribute To Jackie Leven features 22 specially recorded new tracks reimagining the brilliance of Jackie Leven, featuring big names and big fans including Eliza Carthy, Ralph McTell, Boo Hewerdine, Tom Robinson & Ian Rankin. Each artist has also contributed sleevenotes to the extensive booklet detailing their experiences of knowing and working with Jackie and why they wanted to contribute to this tribute album. Proceeds from this album will benefit the Westminster Drug Project (WDP) a charity that continues the work of Jackie’s own charity, The CORE Trust.

An exclusive vinyl version of the Sept 2021 released newly recorded tribute compilation to mark the 10th anniversary of the passing of the Scottish singer Jackie Leven.