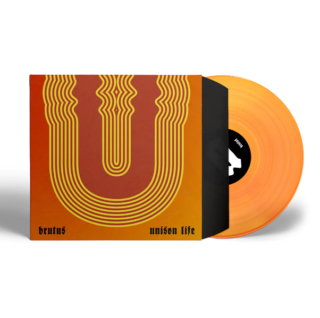 When times are tough, or you’re feeling worn down, you start longing for a life of total peace. A life where there are no fights, arguments or lies; where there is no such thing as disappointment and your actions have no consequences. Some might call it a “fantasy world”. Genre-jumping Belgian trio Brutus call it the “Unison Life” – a phrase that titles their third studio album. Unison Life is about all the stuff that wears you down in the first place. It’s the ugliness, the pain, and the acts of bravery that get you through it all. Beginning with a portrait of contentment and unravelling from there, the album goes into battle and asks what really counts. In their own words: “Is this Unison Life a hoax? Or a quest?”

Since their formation in 2014, Brutus have made a name for themselves with their restless, emotionally raw rock that traverses the landscape of metal, punk, post-hardcore and beyond – often in the same song. The three members first met in their hometown of Leuven, where they cut their teeth playing in different local bands. Their influences are wide and varied. Drummer/vocalist Stefanie Mannaerts – who grew up above a music shop run by her family – is into a variety of genres from post-metal to electronic music. Bassist Peter Mulders is more of a punk guy, while guitarist Stijn Vanhoegaerden is into country and more melodic rock. Their diverse tastes come together through Brutus to create a sound that’s as heavy as it is unexpected, full of beauty and surprises.

From their 2017 debut album Burst, to 2019’s Nest, to releasing a May 2019 performance at their hometown venue Handelsbeurs Concert Hall as a live album during the pandemic, Brutus has levelled up at every turn. However, it wasn’t until Unison Life that Brutus had the time and space to really consider their direction. “I wanted every song to feel like the last song we’ll ever write,” Mannaerts explains. “It killed me inside because it’s almost an impossibly high standard, but that was my personal goal for this album. It was a two-year quest of trying to do better, and I’m very proud of what we’ve done together.”

Brutus worked on Unison Life for a year and a half, though most of that time was spent hanging out. When they weren’t stuck at home in quarantine they were holed up in their rehearsal space in Ghent, making the most of the free time afforded to them by the pandemic by experimenting, trading influences, talking and cooking together. Between writing sessions, they scoured second-hand websites for different things – a lot of amps, guitars, basses, a bass synth, effects pedals, even some chimes – to play with. “There was always something new we tried. Not because the song asked for it, or for the sake of it, but because we were experimenting,” says Mulders. “I don’t know how this album would have sounded if we had to write it between tours and didn’t have as much time to experiment with the songs.”

From pensive slow-burners like “What Have We Done” and “Chainlife”, to pummelling punk tracks like “Brave” and “Dust”, to sweeping post-rock closer “Desert Rain”, Unison Life is a thick, atmospheric blaze. Its ten tracks represent the most concentrated efforts of their extended writing period, but there’s also more breathing space on it than Burst or Nest. It’s an album of extremes. The heavy parts are even heavier, and the gentle moments are more melodic than ever before. “There’s a strong emotion in us that if you write a [heavy] song then you have to search the other end of the world,” says Mulders. “You have to have contrast.”

Vanhoegaerden brought in influences from the Americana he was listening to at home, toying with Nashville tunings in a rock setting, while Stefanie – feeling nostalgic during the pandemic – began exploring what she describes as the “foundations” of the music she would normally listen to. There was a Moby era, a Cranberries era – neither of which are explicit on the album, but their impressions can be felt on the hypnotic ambience of “Miles Away” and the sombre depth of Mannaerts’ vocals. These new influences also came with a fresh perspective as they aimed to make songs that don’t just sound good right now, but that stand the test of time.

“With Burst we were a new band, so it was all about tightness and heaviness,” Mannaerts explains. “With Nest we experimented more and put more depth into the songs. And with this album I feel like we tried to master all of those things at once. Like, do we need this layer or not? Do we need four bars or not?” It’s an approach Mulders describes as “purifying the Brutus sound” – of concentrating the pure elements of Brutus, and doing away with the rest.

Unison Life asks whether a life of contentment is a myth or a challenge; a delusion or a goal. The themes are intimate but universal, with Mannaerts considering ageing without feeling changed (“Victoria”), the demands of friendship when you’re already drained (“Dust”), the fear of letting people down (“Chainlife”) and the difficulty of suffering in silence (“Brave”). Lead single “Liar” is Brutus in a nutshell, starting off with a snaking guitar riff, lifting off into an anthemic post-rock chorus, and finally reaching a chug-heavy third act that makes good use of those chimes they found. It’s a bridge between Nest and Unison Life, combining the changes of direction they’re known for with the concentrated force of the new album. “When we wrote it, everything we had written was very heavy. For us it’s a logical consequence to counter that with a song that wasn’t too dark or upsetting.”

The biggest deviation from Brutus’ usual sound is opener “Miles Away”. It’s their first and only song without drums, but it still has all the energy of the sky before an electrical storm. Initially written as the album’s conclusion, the lyrics see Mannaerts observing her life from the outside. That feeling of being a step removed – of feeling “miles away” – from your own life is repeated throughout the album, but in this case it’s a reflection on the song itself, which was the first piece of music they wrote where everything clicked into place.

“We had done all this exploring, and we were working so hard trying to do better for this band and this record, and when we wrote ‘Miles Away’ it felt right. Like it always had to be like that,” Mannaerts remembers. “I felt like I finally opened my eyes and realised that what we’re doing now, here in this rehearsal room, is a good thing, and the rest can follow.”

Unison Life finds Brutus at their most intentional. They were more deliberate about the sound, which links into the artwork (produced by Mulders), as well as the music video for “Liar”, which saw Mannaerts travel to Morocco for the first video the band has done that has fun with concepts and storytelling. The absence of touring over the last few years has seen Brutus channel 100% of their energy into Unison Life, and the result is a blistering illustration of a boundary-pushing band at the top of their game.

4. What Have We Done