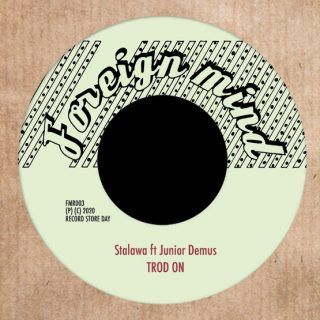 Reggae and dancehall thrive when repurposing the familiar to create something new. This is what Scotland-based French producer Stalawa has achieved with his limited edition Record Store Day release, Trod on. He’s refashioned a rare Canadian production of the King Tubby inspired Tempo rhythm, Dunne Done, and enlisted gritty-voiced Jamaican dancehall emcee Junior Demus for a haunting, horns-driven track with a hypnotic and unstoppable groove. Stalawa followers will recognise the rhythm, christened Dundee Done, from his Stalawa In East Africa EP project on Glasgow’s Scotch Bonnet Records. Junior Demus is a dancehall talking legend of the early 80s, who took his name from his resemblance to the similarly granite-toned microphone pioneer Nicodemus. Demus’ vocal, with its resolute, Rasta-inspired lyric, was recorded in New York with the help of trumpeter and engineer Mush1. The limited quantity vinyl release, on Stalawa’s Foreign Mind label, comes with a stripped down instrumental version for the next generation of emcees to ride.