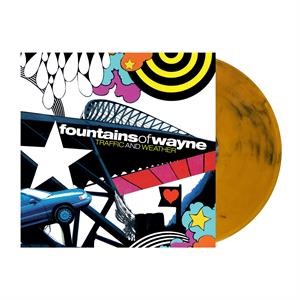 Not since Ray Davies has a songwriter been able to craft such sharply observed vignettes in the space of a three-minute pop song like the late Adam Schlesinger. And on 2007’s Traffic and Weather, Fountains of Wayne’s fourth album, Schlesinger took his art to a new level, singing short stories as varied as crushing on a DMV clerk (“Yolanda Hayes”), celebrating the sexiness of a car not generally considered sporting (“92 Subaru”), being broke (“Strapped for Cash”), and having luggage lost by an airline (“Michael and Heather at the Baggage Claim”). And while it lacks a radio-friendly hit like “Stacy’s Mom”—it should be mentioned that Chris Collingwood only contributed three songs to this record—there are still earworms aplenty, particularly on “I-95,” Collingwood’s “Seatbacks and Traytables,” and the title tune. Finally out on vinyl, our Real Gone release comes with a printed inner sleeve featuring lyrics and in a gold with black swirl pressing limited to 4000 copies, exclusive for Black Friday!

5. Fire In the Canyon

6. This Better Be Good

8. Michael and Heather At the Baggage Claim