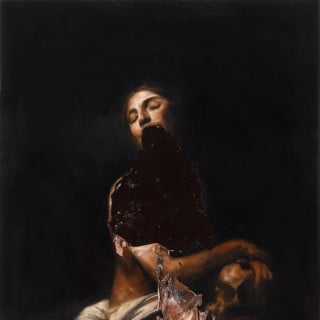 London-based indie/alternative band The Veils released their fifth album ‘Total Depravity’ on August 26, 2016. The album was recorded in Los Angeles, London, New York and Porto and features production by El-P of Run the Jewels, Adam Greenspan and Dean Hurley. During the same month David Lynch also announced Finn Andrews would appear in the new series of Twin Peaks. The album cover features artwork by renowned Italian artist Nicola Samori. Two songs have been released from the album so far, Axolotl and Low Lays the Devil. The video for Axolotl was filmed on Bethells Beach in Auckland, New Zealand and features a Charles Darwin-like figure in the midst of a surreal exorcism in the Desert, eventually transforming into a large tentacled figure in a hat.