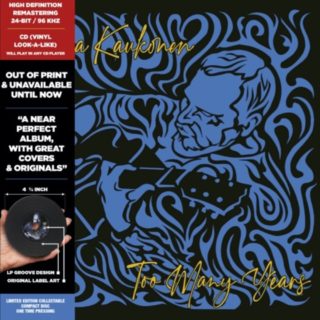 Too Many Years (CD)

JORMA – Guitarist for Hot Tuna and Jefferson Airplane, Rock and Roll Hall of Fame Inductee, Grammy Award Winner & Rolling Stone Magazine – Top All Time Greatest Guitarists. Too Many Years is a Jorma Kaukonen studio album released in August, 1998. It was his last studio album on Relix Records. Michael Falzarano returned to play guitar and help produce (as he did on the previous Kaukonen solo album). He also sang lead on several tracks. The keyboard work was now handled by former Jefferson Starship keyboardist Pete Sears, who had been playing with Hot Tuna since 1992. This release has NEVER been released on the CD “vinyl look-a-like format”. Special Format: CD (Vinyl Look-A-Like Compact Disc). This polycarbonate CD is black in color on both sides. The front includes groove vinyl design with a record label. The sound includes High-Res remastering that will play in any CD player. The packaging includes a carboard jacket, printed inner sleeve and an OBI side spine. This is a MUST for fans/collectors of Jorma Kaukonen, Jefferson Airplane and Hot Tuna.