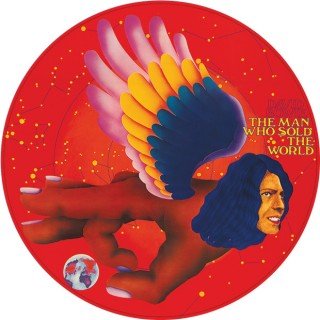 Record Store Day, 16th April, 2016, brings a very special limited edition Bowie picture disc release: the German sleeve of the original Mercury The Man Who Sold The World round cover.
This picture disc features the original German LP fold out round cover with artwork designed by Witt of Hamburg. The sleeve originally unfolded to reveal two foot wide circular images of those featured here on the picture disc.
The original version of this release is the rarest of the Mercury versions of the album, which include the ‘Dress Sleeve’ and the ‘Cartoon/Cowboy Cover’.