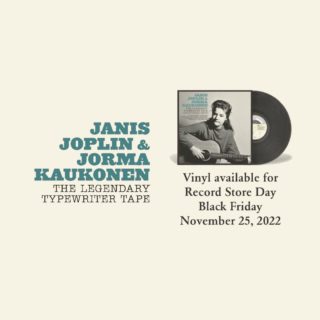 Before there was Big Brother and the Holding Company, before there was Jefferson Airplane, there were Janis Joplin and Jorma Kaukonen, two lovers of the blues. And there was a typewriter. On June 25, 1964, with both booked to perform at a benefit gig at San Francisco’s Coffee Gallery, Janis arrived for a rehearsal at the apartment Jorma rented on Fremont Street in Santa Clara with his Swedish wife Margareta. Kaukonen owned a tape recorder and turned it on to capture their duets, six (known) songs in all. The six tracks began circulating among collectors on bootleg recordings in the ’70s under the name “The Typewriter Tape.” Why typewriter? Simple: Throughout the recording of the guitar and vocals, that’s the only other sound that is heard. Off in another corner of the room, Margareta had been typing a letter to her parents back home.

6. Nobody Knows You When You’re Down and Out