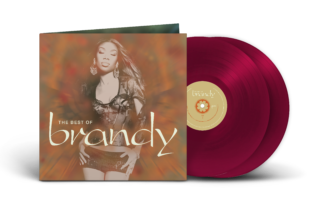 The Best of Brandy

The Best of Brandy was originally released on CD only in 2004. This is the first time the album will be available on vinyl, and it will be 2-LP Fruit punch colored vinyl. It features her hit singles from each of her Atlantic Albums – Brandy, Never Say Never, Full Moon, and Afrodisiac. Notable tracks include “The Boy Is Mine” Feat. Monica, “Talk About Our Love” feat. Kanye West, and “I Wanna Be Down” (Remix) feat. Queen Latifah, MC Lyte, and Yo-Yo. It also includes notable covers including a cover of Michael Jackson’s “Rock With You” featuring Heavy D.

A3. ANOTHER DAY IN PARADISE

B2. TOP OF THE WORLD

C3. TALK ABOUT OUR LOVE

D2. ROCK WITH YOU