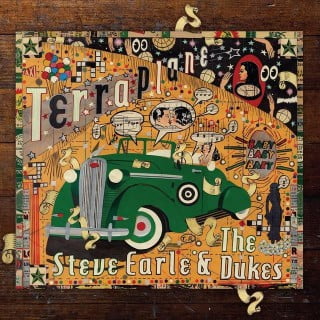 Steve Earle & The Dukes released the new album Terraplane on February 17th via New West Records. The 11-track set is the follow up to the 2013 album The Low Highway and features Earle’s longtime band The Dukes, comprised of Kelly Looney, Will Rigby, Chris Masterson and Eleanor Whitmore. The album was produced by R.S. Field (Buddy Guy, John Mayall), engineered by Earle’s longtime production partner Ray Kennedy and recorded at House of Blues Studio D in Nashville, TN. Terraplane will be available as a single compact disc, deluxe CD/DVD, digitally, as well as 180g vinyl. The deluxe version of the album will include 24-bit high-res audio of the album as well as a long-form interview between Earle and acclaimed journalist Mark Jacobson, 3 live, acoustic songs filmed on the porch of House of Blues Studio D, and a behind-the-scenes short film about the making of the album.