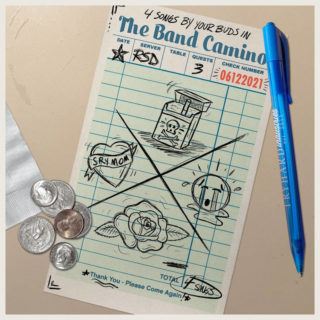 4 songs by your buds in The Band CAMINO

The Band CAMINO RSD piece is coming 12 June, title: 4 songs by your buds in The Band CAMINO. Three have already been released digitally , so the main exclusivity is this being colored vinyl and is the first physical release for all. 1. 1 Last Cigarette 2. TBC 3. Roses 4. Crying Over You with Chelsea Cutler. Dubbed “Rock’s next big thing” by Billboard, The Band CAMINO writes lovelorn songs about perseverance and personal growth. The group has released three EP’s: 2019’s tryhard, 2017’s Heaven and 2016’s My Thoughts On You, featuring an array of anthemic singles that have collectively amassed more than 300 million streams around the globe. tryhard, their Elektra Records debut EP, overflows with massive hooks, highlighted by the sharp and reflective singles: “Daphne Blue,” “See Through,” and “Honest.” “Daphne Blue” which made waves on AltNation spending multiple weeks at #1 on the Alt18 countdown, while the band received additional media coverage from Billboard, Ones To Watch, LADYGUNN, Paste, Consequence of Sound, American Songwriter, Elite Daily, LA Weekly, and more. 2019 also saw The Band CAMINO embark on a completely sold-out U.S. headline tour, along with festival appearances at Forecastle, Lollapalooza, and Austin City Limits, where they were named a “breakout act” by Grammy.com. More recently, The Band CAMINO was handpicked to be the main support on Dan + Shay’s arena tour, and were tapped by 5 Seconds of Summer to support them stateside.