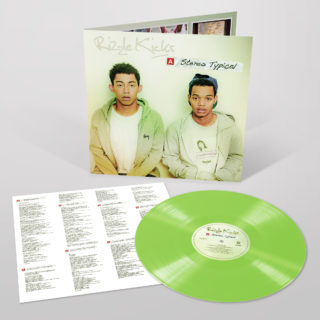 To mark Record Store Day in 2022 Universal Music Catalogue are making Rizzle Kick’s 2011album ‘Stereo Typical’ available as an LP, on limited edition light green vinyl.‘Stereo Typical’ has been newly mastered for 180 gm vinyl at Abbey Road Studios, and is housed in an eye-catching gatefold sleeve reproducing the original artwork.Originally released in October 2011, ‘Stereo Typical’ was the Brighton Hip-Hop duo’s debut album, peaking at No. 5 the following February. It includes the singles ‘Down With The Trumpets’ (No. 8), ‘When I Was A Youngster’ (No. 8 -included in the soundtrack to director Danny Boyle’s opening ceremony at the 2012 London Olympic Games), the Fatboy Slim-produced ‘Mama Do The Hump’ (No. 2 -denied the top spot by Jessie J’s ‘Domino’, despite a promo video featuring a cameo appearance from James Corden) and ‘Traveller’s Chant’ (No. 44).