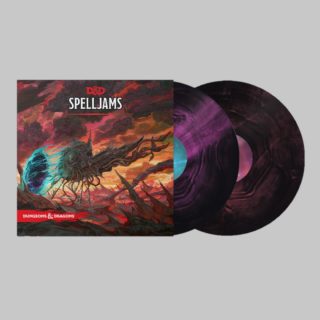 For nearly five decades, Dungeons & Dragons has inspired generations of creative people to make movies, novels and, yes, music. Now that relationship is even more distinct with the release today of an album of music created by cutting-edge bands and musical acts all inspired by Spelljammer: Adventures in Space. The far-out storytelling in the world’s greatest roleplaying game’s latest offering is fertile ground for composing some of the most original songs you’ll hear this year from bands like Magic Sword, Shabazz Palaces and OSEES. Spelljams features a double LP’s worth of tracks from artists all produced by Chris Funk, guitarist from The Decemberists who plays D&D with many folks in the music scene in Portland, Oregon. Chris Perkins, story architect at D&D and lead designer of Spelljammer, worked with Funk to bring the Flash Gordon-esque soundtrack to life.