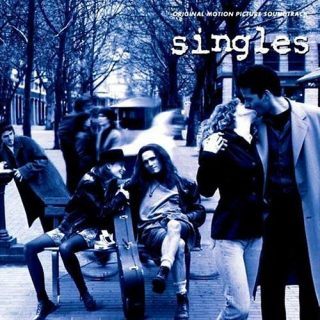 The romantic comedy Singles, in part a homage to director Cameron Crowe’s hometown of Seattle, was released at exactly the right time (summer 1992). Nirvana’s Nevermind had symbolically knocked Michael Jackson off the top of the album charts at the beginning of the year, and the underground buzz about Seattle bands like Alice in Chains, Soundgarden, and Pearl Jam was beginning to find its way past circles of indie aficionados and open-minded hard rock fans and into the mainstream. Singles helped crystallize the idea of the “Seattle scene” in the mainstream public’s mind, and it was also one of the first big-selling ’90s movie soundtracks (it went platinum and reached the Top Ten) to feature largely new work from contemporary artists. The soundtrack’s strength was the way it was so firmly rooted in place — where future soundtrack extravaganzas simply contrived to gather as many big-name acts as possible, Singles focused specifically on Seattle-area music (quite logically, given the film’s plot and setting), which gave the album the feel of a cohesive document. It didn’t hurt that nearly all the bands involved contributed high-quality material — although Nirvana is absent, scene stalwarts Soundgarden, their lead singer Chris Cornell (the haunting acoustic ballad “Seasons”), Alice in Chains (“Would?,” which showed up on their subsequent album, Dirt), Mudhoney, Pearl Jam (two tracks), and Screaming Trees all weigh in with strong new cuts, as well as stylistic compatriots Smashing Pumpkins (Chicago) and Minneapolis alt-rock god Paul Westerberg (his first two charmingly playful solo songs). The vaults are mined for chestnuts by Mother Love Bone (the epic “Chloe Dancer/Crown of Thorns,” perhaps their strongest moment) and Seattle native Jimi Hendrix (the shimmering “May This Be Love,” which fits the mood of the album perfectly), and Seattle sisters Ann and Nancy Wilson, leaders of Heart, appear as the Lovemongers on a stellar acoustic cover of Led Zeppelin’s “The Battle of Evermore.” Despite Mudhoney’s gripe that the whole early-’90s Seattle scene was “Overblown,” Singles illustrates through its marvelous consistency the richness and wealth of the city’s musical talent, as well as the alternative scene in general; meanwhile, the Lovemongers and Hendrix cuts demonstrate the city’s past musical heritage, and along with the Westerberg numbers, provide a handy template of several major (albeit more mainstream) grunge-scene influences — Hendrix’s guitar-heavy psychedelia, Led Zeppelin’s epic hard rock, the Replacements‘ post-hardcore power pop — that sit very well next to their followers. So Singles isn’t just an entertaining sampler of Seattle grunge in its prime; it’s a milestone in the breakthrough of alternative rock into mainstream popular culture, neatly and effectively packaging the Seattle phenomenon for the wider national consciousness.