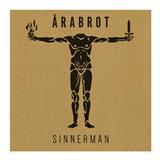 Arabrot have recently finished recording their most astounding piece of True Norwegian Art Rock to date: “Who Do You Love”. As a tastemaker for this long-anticipated successor to 2016’s critically acclaimed ,The Gospel” album, the band is unleashing 2 tracks of the upcoming album up front, as an exclusive RECORD STORE DAY release… which coincidentally falls on the same date as their performance at ROADBURN FESTIVAL on April 21st. FOR FANS OF: SWANS, UNSANE, THE MELVINS, DEATH IN JUNE, CAPTAIN BEEFHEART, KILLING JOKE