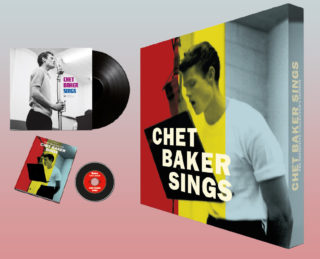 Including Book + CD: The Making Of Chet Baker Sings

The complementing talents of Chet Baker (1929-1988) both as a trumpet player and as a singer are now well known. Both Chet’s trumpet and voice seem to be extensions of the same musical
personality, and once you’ve become familiar with both facets of Baker, you expect to hear them both. However, this album was a revelation at the time and won Baker new fame and a new audience, which was less familiar with jazz than with pop music. The reasons are quite clear: Chet’s voice is tender and beautiful, and at the same time his phrasing always swings and surprises. While Chet Baker Sings is now considered a classic and continues to be a jazz best-seller, its initial critical reception wasn’t all that good, and many renowned jazz writers disapproved of Chet’s vocals for being rough, unprofessional and non masculine. Despite the critics’ opinions, the album never stopped selling and its popularity was such that after the initial 1954 release as a 10” LP which contained just eight tracks, it reappeared in 1956 as a 12” LP.

This wonderful definitive edition puts together: • the original 12” LP CHET BAKER SINGS in a 180-gram virgin vinyl gatefold edition illustrated with William Claxton photos from the sessions • the complete CD containing the same album plus 6 bonus tracks • an 80-page fully-illustrated hardcover book on which writer BRIAN MORTON explores the genesis of the iconic album. Co-author, with Richard Cook, of The Penguin Guide to Jazz Recordings, Morton is also the author of The Blackwell Guide to Recorded Contemporary Music (1996), a frequent contributor to Jazz Review, and a colaborator with the BBC. This book also includes a specially written essay by bassist RICCARDO DEL FRA, on which he speaks about his experiences playing with Chet, as well as dozens of classic, rare and never before published photos by such important jazz photographers as William Claxton, Jean-Pierre Leloir, and Bob Willoughby, among many others.