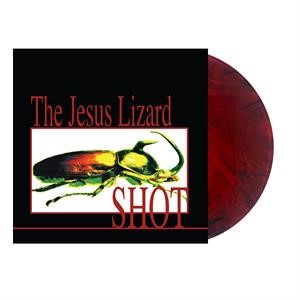 After Austin-based Scratch Acid disbanded, caterwauling vocalist David Yow and bassist David Wm. Sims moved to Chicago, where they formed The Jesus Lizard and proceed to make a glorious racket throughout the ‘90s and beyond. Shot was their first major label release (for Capitol in 1996) and their first one without famed underground producer Steve Albini; but GGGarth (Melvins, L7) ably filled Albini’s large shoes behind the board, cleaning up the sound a bit while losing none of The Jesus Lizard’s grungy, menacing mania (check out “Thumbscrews” and “Skull of a German”). For its first time on vinyl, we’re releasing Shot with a printed inner sleeve featuring lyrics and a fire orange with black streaks pressing limited to 2500 units!

6. Skull of a German

9. Too Bad About the Fire