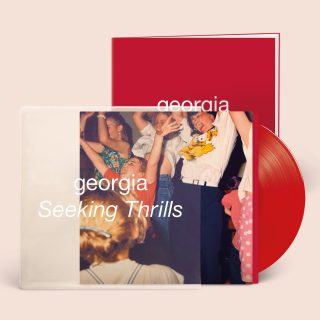 Georgia Barnes is seeking a thrill. Her latest album, ‘Seeking Thrills’ is a reflection of a year of musical exploration, as she takes us even further than her thrilling debut, to tell us the story of hedonism, euphoria and the transcendental power of the dancefloor.

The North West Londoner describes the follow-up to her critically acclaimed debut as mostly, the result of a year in the studio being inspired by the Chicago House and Detroit Techno of the early 80s. Laughing, she admits an obsession which took her to revisiting dance legends. “I was listening to the whole of Trax records so Frankie Knuckles, Mr Fingers, Marshall Jefferson and that whole scene, but also Detroit like Underground Resistance, Jeff Mills, Kevin Saunderson” she enthuses, “if you’re on a really good dancefloor with a really good DJ, you can be whoever you want to be”.

The euphoria of liberation predictably sets the scene for ‘Seeking Thrills’, and you can hear Georgia’s love affair with dance culture, but also of replicating drum beats and sounds. As a session drummer, making her name playing and collaborating with Micachu, Kwes, and Kate Tempest, she used her technical knowledge to replicate set-ups from 80s house and techno. “The drummer jumped out” she giggles. “I used 909s – the drum machines that would have been used in Chicago & Detroit and everything you hear on the album is analogue. I didn’t like, go out and spend £30,000 on getting all the correct equipment, I just used what I had and used it in a way that they would have done it. I’ve got an all analogue keyboard that I midi’d up and did it in the way that they would have”. She takes a breath. “I’m obsessed with the sound of drum machines!”

The result is a sonic feat of exploration and excellence, and it’s no surprise that she cites the female power of Fever Ray, the mystical space of James Blake, and sampling finesse of Depeche Mode as influences. Throughout the album, there are notes of her fascination with global sounds, from the reproduced Balinese Gamelan on ‘Ray Gun’, to the Chicago house samples on ‘Started Out’, the textures reflect Georgia’s background in ethnic musicology and hours upon hours spent rifling through records “in the world music section of Honest Jon’s”. For Georgia, production is part of the art, and while she enlisted the expertise of LA engineer Sean Oakley for additional programming and production, it was her and Mark Ralph who worked together on mixing and producing. “I love the process” she says, “but I can get quite solitary, just me and my drums and buttons… I need people to play to!”

The music, she says, is a reflection of rich influences from her lived experience as part of London’s club culture (“I was definitely part of the South London sound and then became a grime kid and a general raver”) musical parents (Georgia’s father is a member of electronic outfit Leftfield) which introduced her to “Kate Bush, Neil Young, Channel One Soundsystem, and Joni Mitchell, to name a few” and her passion as a drummer, falling in love with Sheila E., opening her ears to global instruments and electronic sounds. Beyond the sonics, it’s also refreshingly honest, and ‘Seeking Thrills’ is underpinned with sense of melancholy and power as she shares her uncompromising joy and vulnerability with us, as she moves between fun and calm reflection.

“I was drinking too much” she sighs. She cites the yearning for hedonism that came with late nights in the studio, and the feeling of final submission to the idea that she needed to slow down. “I did a sober year and a half, and it was really quite hard to lose that hedonistic side of me so creating this album was getting myself in check. I felt like all the songs had this thrill-seeking element to it because I was sober, but I was still trying to hark back to it… sort of trying to tap into those thoughts.”

The album takes us into all her obsessions – with London, on the soft vocals of ‘Til I Own It’, where she discusses the city in the shadow of gentrification, rising house prices, and feeling left behind (“it’s about the idea of London, this place that I’ve grown up in and will be in all my life but wondering if I really belong here”) while ‘The Thrill’ takes nods from Kate Bush as she sings, ”I want to feel it again/Seek a thrill to throw it away” while the conceptual nature of her debut album still remains as she introduces us to her character ‘Maurice’ who features on it, who Georgia describes as being “a Chicago dancer who’s the life and soul of the party”.

The upbeat pop charisma of ‘Started Out’ is injected with Mr Fingers’ ‘Can You Feel It’, and as Georgia sings you can almost hear the smile, “We are wicked young fools who behave/Back in the arms of somebody who saved us”. On Mellow, she enlists Shygirl in a sexy ode to “try to get that thrill seeking moment with all my girls getting up to hedonistic behaviour in Tenerife or something”. The pulsing notes jolt us to the middle of a party, as we imagine our head thrown back on every bass clap.

Finding the artwork to best capture the ecstasy of girlhood into womanhood, and how best to find your voice came courtesy of Nancy Honey. The legendary 68-year-old San Francisco based photographer allowed Georgia to use photographs from her archive. “She did these amazing photographs of young girls in the North of England back in the 80s in Hull and she went around and asked the girls what they wanted to be. It just resonated with the music”.

Seeking thrills is a sharply paced and fascinating result, packed with injections of lightness and fun, pared with rich, bubbling melodies that makes listening to it an experience that takes you into the party, through electro-pop into R&B, and back again. Feminine without being saccharine, her deep, brooding reflections carry us through euphoria, heartache and melancholy but always with the memory of the good times. Georgia is reminding you of the altitude of your last real thrill, and when we turn the record on, we’re there again, aching for more.