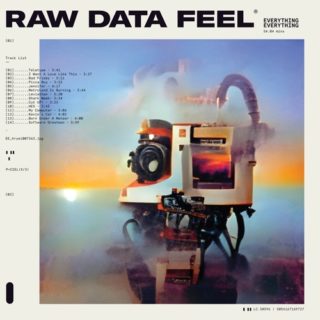 On Raw Data Feel, Everything Everything set about revolutionising modern pop music, with frontman Jonathan Higgs abandoning his own brain and letting technology do at least some of the thinking: creating an A.I. programme and feeding it selected information – the entire terms and conditions of LinkedIn, the ancient epic poem Beowulf, 400,000 4Chan forum posts and the teachings of Confucius – into A.I. automation processes and using its responses as a basis for the record’s lyrics, song titles and artwork creation.

Produced by Everything Everything guitarist Alex Robertshaw and production partner Tom Fuller (aka Kaines and Tom A.D), Raw Data Feel follows 2020’s RE-ANIMATOR which charted at #5 in the Official Albums Chart. RE-ANIMATOR was the band’s joint highest charting position, equalling 2013’s Arc and 2017’s A Fever Dream – with many hailing their visionary cocktail of intricate experimentation and immediately accessible art-pop.

Printing a limited number of copies, CAPS LOCK ON: Lyrics + Debris 2007-2022 is a full-colour, hardback edition presenting the lyrics to all songs released by the band including b-sides, rarities and new album Raw Data Feel. It will present a treasure trove of previously unseen images featured alongside the lyrics, including behind-the-scenes archive material of notebooks, chord sheets, set lists and photos.

Raw Data Feel – that title, says drummer Mike Spearman, reflects an attempt to make it “straight from the heart, rather than the ego” – was an essential leap forward for the band. Having finished their fifth album RE-ANIMATOR in 2020, just as the pandemic closed in, there was an inescapable anti-climax when it became clear they couldn’t have the closeness and closure that comes with playing an album’s songs live. They needed, says Pritchard, something to push them on through that dispiriting lull; Raw Data Feel was the “fulcrum”, providing the drive to find new ways of working, new ways of being Everything Everything. Despite the straightened circumstances of the past two years, it’s a record that finds new horizons to chase, illuminating previously hidden entry points for their ongoing interrogation of the modern human condition in all its pixelated, shape-shifting glory.
Since their 2010 debut Man Alive, Everything Everything have captured the human face reflected in the doom-scrolling screen, sensitive to both the internal chatter and external chaos. Raw Data Feel isn’t just about raging against the machine or the dying of the light,– it’s a record that consciously tries to take horror and trauma and reshape it into something positive. “It’s the sound of the record as well,” Higgs says, “a lot of technology meeting organic sounds. I think there is a certain type of interaction between Alex’s technology and the human that is using it which is quite unique. I’m really not ashamed to say I think it’s amazing.”

Even in dark times, Raw Data Feel is a record that uses its unfailing creative impulses and instincts to reactivate the idea of spontaneity, exploration – even pure untramelled fun. “The humans are getting information back, deciding what has feeling and what doesn’t,” says guitarist Alex Robertshaw. With Raw Data Feel, the humans are doing a great job. Trying it again, trying it another way, Everything Everything are back out there again, remodelling the old worlds, finding new ones to explore.