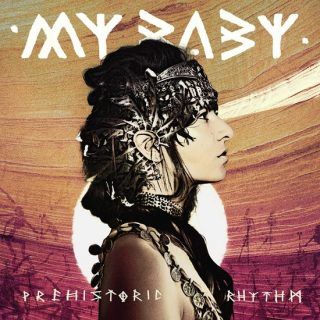 It hasn’t taken long for Amsterdam based psychedelic, shamanic trio MY BABY’s swampy blues and funk-inflected sound to cast a formidable spell, taking the world by storm.

Over the past 3 years, Dutch brother-sister-duo Sheik (drums) and Cato van Dyck (vocals) and New Zealand guitarist Daniel “daFreez” Johnston have had their mojo working overtime and are now ready for the release of their third album “Prehistoric Rhythm”. With their new album, the band aim to channel a primal awareness amidst hypnotic beats, shimmering soulful vocals and psychedelic riffs on the back of rootsy blues and dubbed out funk.

Daniel Johnston: “Over the past two or three decades’, electronic dance music has become a huge part of our culture. It’s hard to fathom just how many people connect and celebrate life by going to dance parties and raves. These gatherings are quite similar to tribal celebrations and rituals that have been around for thousands of years across all cultures in the world. The desire and need for those rituals remains and has become a fascination for us and we have made that trance-like hypnotic groove an essential part of our live performance, but it is also prevalent on a lot of the album. It’s funny to think of it. Going back to prehistoric times, people dancing round a fire together! It’s in our DNA.”

MY BABY’s music has been influenced by the power of spiritual music (gospel and voodoo spirituals) and the entrancing hypnotic quality found in music accompanying shamanic rituals. The roots of these phenomena can be traced back thousands of years, so can the music. This ‘tracing’ has become an important part of the ‘personal’ vision of the band and is a central theme on the upcoming album ‘Prehistoric Rhythm’. The band has delved into some of those rituals, some of which exist to this day, and reflect on how a lot of contemporary culture has inherited from the past, that its cultural activity stems from these ancient traditions.

First single “Love Dance” is an African inspired trance-like evocation of a tribal ritual involving the search for identity, love and spirituality. The protagonist is at peace after transcending the desire to feel complete through the presence and appeasement of others.

Joost van Dijck: “We recorded this album primarily on a ‘4-track ampex deck’ from the fifties. We wanted it to sound old so you feel as though you experience something not linked to the present, but rather like traveling through different era’s”

With the release of their new album, MY BABY endeavours to take the audience on a shamanic influenced musical journey. And pose to develop a theatrical mythopoetic yet danceable form of music that can entice, uplift and engage the listener in a way that it allows us to discover something that resides within our collective consciousness just as the characters in the songs are forever searching for a heightened spiritual and primal awareness amongst the turmoil of our modern-day society.