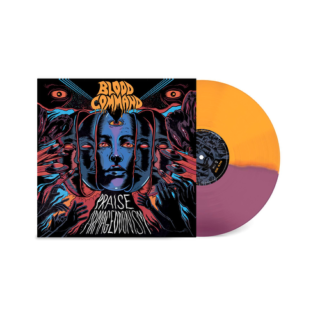 The critically acclaimed, unique Norwegian quartet Blood Command are back with brand new album ‘Praise Armageddonism’ via Hassle Records. Celebrating a brand new chapter for the band, this new album is the first featuring Nikki Brumen, formerly of Pagan, is now fronting the band and taking over lead vocals.

With a distance of 10,000 miles between Nikki (based in Melbourne, Australia) and the rest of the band (in Bergen, Norway) – 2020 didn’t quite go to plan. With initial recording plans in Norway having to be put on hold, the band made a decision in January 2021 to pivot, instead opting to record the new album remotely; all music being recorded in Norway, with Nikki recording vocals in a local studio, once regional restrictions permitted. A Villain’s Monologue is the first track taken from the new album, with Nikki showing just why she was so highly regarded in previous outfit Pagan, inviting Kerrang to describe her vocals as “a riotous display of untameable talent that undoubtedly marks her down as a future star in the making”.

The self-described ‘deathpop’ group are a one-of-a-kind proposition. Hardcore meets metal meets pop meets punk, the band have previously been called ‘one of the world’s best kept secrets’ by Rock Sound, received one of the Albums of the Year in Kerrang!, and applauded by Metal Hammer.

Tracklist:
1. Praise Armageddonism (Awake Theme)
2. Saturday City
3. The End Is Her
4. Everything You Love Will Burn
5. A Questionable Taste In Friends
6. A Villain’s Monologue
7. Nuns, Guns & Cowboys
8. I Just Want That Movie Ending
9. Burn The Blasphemer
10. Last Call For Heaven’s Gate