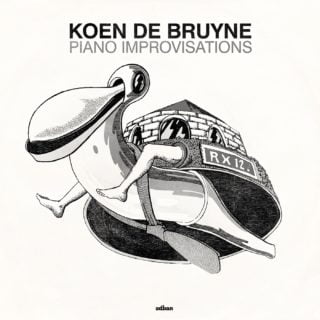 Belgian composer, arranger, pianist and keyboardist Koen De Bruyne (1946–1977),
brother of celebrated singer and songwriter Kris De Bruyne, had his own — unfortunately
short — stint in the field of pop, jazz, fusion and funk in the 1970ies. He rose
to the scene as a wanted session and live musician for local heroes such as Johan
Verminnen, Will Tura, Ferre Grignard, Mad Unity, Black Blood and his brother Kris.
In 1974, after some years in the trade, Koen De Bruyne debuted as a solo artist. The
inspired epic ‘Here Comes The Crazy Man!’ undeniably proves he was much more than
a gifted ‘hired gun’. He gathered a fabulous line-up for the recording sessions, featuring
three members of the legendary Placebo (Marc Moulin’s jazz/funk outfit). Recorded
in the renowned Brussels Madeleine studios with some of the most prolific and
inventive of his contemporaries, HCTCM! is a truly exceptional and imaginative
record and has gained the status of sought after cult classic decades after its release.
Koen De Bruyne’s only real album to have seen the daylight is a rare Belgian gem, one
that stands the test of time and is waiting to be rediscovered by new generations of
listeners.During our research for the reissue of HCTCM! in 2015, we were lucky enough to get
in touch with Koen’s brother Kris De Bruyne, one of Belgium’s most influential singer
songwriters. Kris dug up quite a bit of unreleased treasures from the family vaults. One
of the tapes included these 4 majestic solo piano improvisations. One of the tracks has
posthumously been included on Kris’ album Ballerina’s (the album Koen was producing
when he passed away), the other three had vanished ever since. We are proud and grateful
to be able to release these outstanding compositions for the first time on vinyl,
remastered from the original tape. These almost impressionist improvisations shed yet
another light on the brilliant and versatile composer and musician Koen De Bruyne.