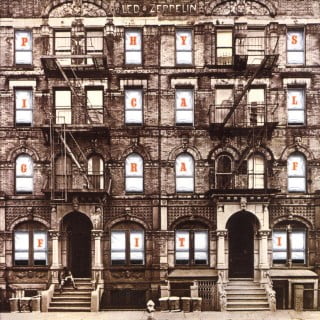 Physical Graffiti is the sixth studio album by the English rock band Led Zeppelin, released on 24 February 1975 as a double album two years after their previous studio album. The band wrote and recorded eight songs at Headley Grange; these eight songs stretched beyond the typical length of an LP. The band decided to make Physical Graffiti a double album by including unreleased tracks from earlier recording sessions: one outtake from Led Zeppelin III; three from Led Zeppelin IV; and three from Houses of the Holy including its unused title track.