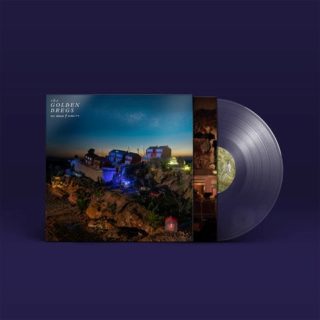 Hailing from Cornwall – a county in south-west England that draws thousands of tourists on holiday, and where thousands of locals could never hope of affording one – Woods grew up with a keen awareness of that gap between idealism and reality. the GOLDEN DREGS’ third album, On Grace & Dignity, is released on 10 February 2023 and considers his home and what it means to be shaped by a place – in this instance, Truro, Cornwall’s capital, home to a rare three-spired cathedral, a peaceful river and a lot of empty shops and flimsy out-of-town housing estates. Written, recorded and produced by Woods from his South London home and childhood bedroom in Truro, it was mixed by Ali Chant (Perfume Genius, Aldous Harding) who provided additional production.

On Grace & Dignity’s origins lie in winter 2020 when Woods lost his job in lockdown and moved back to his parents’ house. The only work he could get was as a labourer on a poorly run building site on the grimmest outskirts of Truro. “It was such a bleak winter – waist-deep in mud digging holes and rolling out turf on top of building waste, really grim stuff, which became the backdrop to the stories I was trying to write,” he adds, citing Raymond Carver, Lydia Davis and Richard Hugo as influences.

In among the personal reflections on loss of innocence and inferiority, Woods spins subtly interweaving narratives about survival, desperate acts of violence, loss and the limitations of community in the face of rapacious gentrification. Nevertheless, it is, appropriately for an album about home, somewhere you’ll want to spend a while.