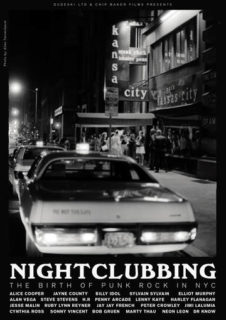 Nightclubbing – The Birth Of Punk In NYC

“Nightclubbing: The Birth of Punk Rock in NYC” is the first-ever documentary about the renowned New York City nightclub Max’s Kansas City (1965-1981), which had an indelible impact on the world of music, fashion, art, culture, and the creation of the New York City Punk Rock scene. As the legendary Alice Cooper puts it: “A million ideas were launched back there,” referring to the Max’s Kansas City famous backroom, where everybody gravitated toward the pop art genius Andy Warhol, who held court there. This first-ever film on Max’s Kansas City features never-before-released footage, including footage of three of Warhol’s superstars – Jayne County, Ruby Lynn Reyner and Penny Arcade.