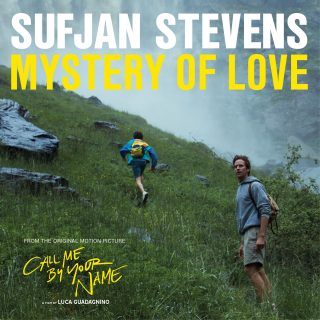 Director Luca Guadagnino of the worldwide movie hit Call me by Your Name found himself resonating with Sufjan Stevens’ lyricism through his work and initially asked Stevens to record an original song. Eventually, Stevens contributed three songs to the Call me By Your Name soundtrack: “Visions of Gideon”, which was used at a very emotional scene at the end of the film, “Mystery of Love,” for which a video was made and a new rendition of “Futile Devices” with piano. Stevens penned the songs by using the script, the book, and the conversations with the director about the characters. It marks Sufjan Stevens’ first soundtrack for a feature film. For the song “Mystery of Love” he received an Academy Award nomination in 2018.

The first pressing of The Mystery Of Love 10” EP is pressed on transparent vinyl. This limited edition of 10.000 copies is individually numbered and only available on Record Store Day.

The American singer-songwriter Sufjan Stevens is well known for creating deeply personal songs with an understanding of the power of melodies and emotional impact. He started back in the 90’s and released his first album in 2000, called A Sun Came. It’s the album in which he introduced himself to the world as a musician who never let any of his feelings floats away. He just integrate it in his rhythms and melodies, from electronica and folk to indie and rock. In 2005 he brought his album Illinois to life, a masterpiece which reached number one on the Billboard charts.

Call Me By Your Name, the multiple award winning movie by Luca Guadagnino, is a sensual and transcendent tale of first love, based on the acclaimed novel by André Aciman. Summer of 1983, Northern Italy. An American-Italian is enamored by an American student who comes to study and live with his family. Together they share an unforgettable summer full of music, food, and romance that will forever change them. The film received critical acclaim upon its release, being already positively compared to Brokeback Mountain and Moonlight. Critics praised in particular Chalamet, Hammer and Stuhlbarg’s performances, Guadagnino’s direction and the screenplay.