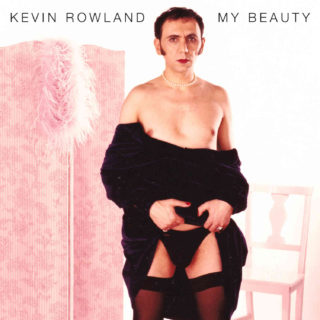 ‘Originally released in 1999, ‘My Beauty’ was the second solo album from Dexys/Dexys Midnight Runners’ lead singer Kevin Rowland. The album was mostly unfairly received by critics at the time, but in the years since has come to enjoy cult status. This vinyl re-issue is presented on translucent vinyl with a pink splatter and the originally intended track-listing. Featuring 12 cover songs, personally chosen by Kevin and adapted to make the lyrics more directly reflective of his life. The result was an autobiographical concept record about his battle and recovery from addiction, and his own struggle with self-esteem, exemplified by his incredible version of the George Benson and Whitney Houston classic ‘The Greatest Love Of All’. Kevin’s choice of style for this record was men’s dresses – in stark contrast to the prevailing mood in the late 1990s of British lad rock. The cover design was a radical look for the time – silk dresses, stockings and make up, not cross-dressing but a look that was undoubtedly feminine. The album was released on Oasis’ label Creation, after Kevin was signed by Alan McGee (who loved Kevin’s new look and labelled it “punk rock”). However, ‘My Beauty’ was to be the last record released before Creation folded and the chaos that surrounded the label meant they hadn’t secured approval for the cover of Bruce Springsteen’s ‘Thunder Road’. Remastered by original co-producers Pete Schwier and Marco Migliari with Dexys’ stalwart Jim Paterson.

SIDE ONE:
1. THE GREATEST LOVE OF ALL
2. RAG DOLL
3. CONCRETE AND CLAY
4. DAYDREAM BELIEVER
5. THIS GUY’S IN LOVE WITH YOU
6. THE LONG AND WINDING ROAD

SIDE TWO:
1. IT’S GETTING BETTER
2. I CAN’T TELL THE BOTTOM FROM THE TOP
3. LABELLED WITH LOVE (I’LL STAY WITH MY DREAMS)
4. REFLECTIONS OF MY LIFE
5. THUNDER ROAD (PREVIOUSLY UNISSUED)
6. YOU’LL NEVER WALK ALONE