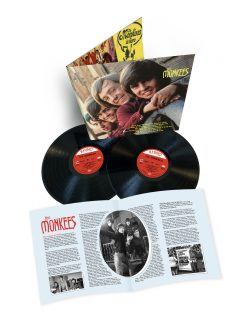 The Monkees, one of the most recognizable names in the annals of pop music history, are an merican rock and pop band originally active between 1966 and 1971, with reunion albums and tours in the decades that followed. The original line up was Micky Dolenz, Michael Nesmith, Peter Tork and Davy Jones. The group was conceived in 1965 by TV producers Bob Rafelson and Bert Schneider specifically for the sitcom series The Monkees, which aired from 1966 to 1968. The music was originally supervised by record producer Don Kirschner, backed by the songwriting duo of Tommy Boyce and Bobby Hart. The four actor/musicians were initially allowed only limited roles in the recording studio for the first few months of their five-year career as “The Monkees.” This was due in part to the amount of time required to film the tv series. Mike Nesmith composed and produced songs from the beginning, Tork contributed guitar work on the Nesmith-produced sessions, while all four contributed vocals on various tracks. Inspired by the Beatles’ film A Hard Day’s Night, The Monkees TV show was picked up as a series by Screen Gems TV in 1965 and the musical side of the project accelerated. Columbia-Screen Gems and RCA Victor entered into a joint venture called Colgems Records primarily to distribute Monkees records. The Monkees self-titled debut and second albums were meant to be a soundtrack to the first season of the TV show, to cash in on the audience.Their first single, “Last Train To Clarksville” b/w “Take A Giant Step,” was released in August 1966, just weeks prior to the TV broadcast debut. In conjunction with the first broadcast of the TV show on September 12, 1966, NBC and Columbia had a major hit. The first long-playing album, The Monkees, was released a month later; it spent 13 weeks at #1 and stayed on the Billboard charts for 78 weeks. After working on set all day, the Monkees (usually Dolenz or Jones) would be called into the recording studio to cut vocal tracks, As the band was essential to this aspect of the recording process, there were few limits on how long they could spend in the studio and the result was an extensive catalog of unreleased recordings. The success of the TV show led to the actormusicians becoming one of the most successful bands of the 1960s. The Monkees have sold more than 75 million records worldwide making them one of the biggest selling groups of all time with international hits, including “Last Train to Clarksville,” “Pleasant Valley Sunday,”
“Daydream Believer,” and “I’m A Believer.” ROG is reissuing their iconic debut album as a deluxe 2LP set with bonus tracks (several of which are unreleased mixes) and are having lacquers cut from the analog tapes for the first time since 1966—creating THE DEFINITIVE version of this album since original release!