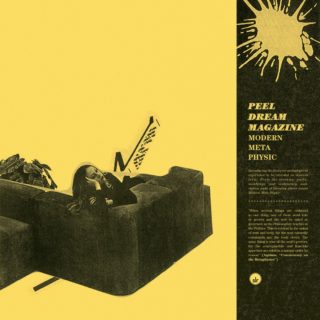 Joe Stevens’ Peel Dream Magazine project has been turning heads and catching ears since late 2017. Stevens is a brilliant writer and arranger and something of a pop scholar; steeped in the history of everything from 60s sunshine pop to 70s kosmische groove to 90s shoegaze and beyond, every Peel Dream album explores new territory and illuminates new corners of Stevens’ roving interest. The story began with Peel Dream Magazine’s debut album Modern Meta Physic, which was released in Fall 2028 and immediately garnered intense interest from music heads attuned to the sounds of artists like Broadcast, Neu!, Steve Reich & Grouper. 2020 brought Agitprop Alterna and its companion EP Moral Panics, records that assimilated shoegaze textures, but put them in service of sharp tunes and a Stereolab-like attention to space age detail. Most recently the band has struck out in new directions with Pad – an album that looks back affectionately at 60s baroque pop, full of sunshine, swing and sophistication. After some time spent out-of-print thanks to ongoing vinyl production delays, we’re very happy to bring you this fresh new pressing of Modern Meta Physic, this time on beautiful yellow & black splatter vinyl. With the recent release of Pad it’s a perfect time to reassess this terrific record and restock the Peel Dream catalog.

10. Due To Advances In Modern Tourism