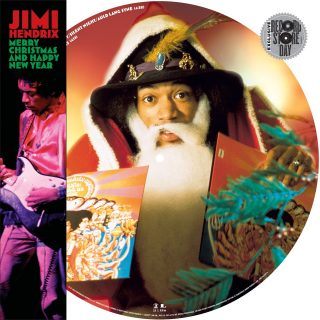 As Christmas 1969 beckoned, Jimi Hendrix, bassist Billy Cox, and drummer Buddy Miles (christened as Band Of Gypsys by Hendrix) engaged in extensive rehearsals for their highly anticipated appearances at The Fillmore East in New York.
To mark the occasion in his own inimitable fashion, Jimi readied this special medley of holiday favorites to celebrate both Christmas and the dawning of a new decade. This medley of “Little Drummer Boy,” “Silent Night” and “Auld Lang Syne,” backed by “Three Little Bears,” a playful Electric Ladyland outtake from 1968, now available on picture disc, featuring the album artwork on one side and a photo of Jimi dressed as Santa Claus on the other.