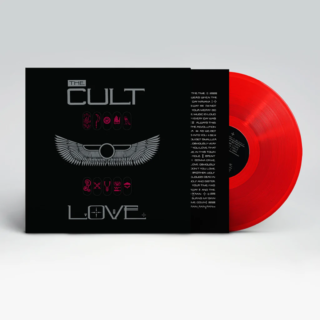 Beggars Arkive release a long-awaited vinyl reissue of THE CULT’S second album LOVE. Two editions are available. Red vinyl is exclusive to independent retail, Black vinyl will be available everywhere. THE CULT is fronted by Ian Astbury on vocals and Billy Duffy on guitar. Their music and albums at this point need no introduction as they have cemented themselves over the years since they began in 1983, as one of the greatest rock bands around. Love was the Cult’s second album, originally released in 1985. It was their breakthrough and produced many singles including “Rain”, “Revolution” and the epic anthem “She Sells Sanctuary” – songs that still resonate today – in fact “She Sells Sanctuary” was recently featured in Season Two of the hit TV show Euphoria. The album eventually defined their career, but at the time, it flew in the face of everything going on in music.