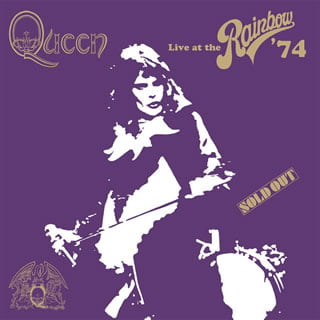 Live at the Rainbow is a live album by English rock band Queen. It has been released in September 2014 in single CD, double CD, DVD, SD Blu-ray and quadruple vinyl formats, as well as a deluxe box set including reproduction tour memorabilia. The single disc and video editions contain a concert from the band’s Sheer Heart Attack Tour, recorded live at the Rainbow Theatre in London on 20 November 1974, while the double CD and vinyl releases include this material plus a concert recorded at the Rainbow earlier in the year, on 31 March, as part of the Queen II Tour. The DVD and Blu-ray also include four bonus tracks from the earlier Queen II concert. Some of the footage from the November show was previously released on VHS as part of the Box of Tricks box set in 1992.