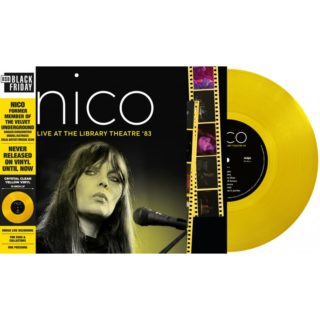 Live At The Library Theatre ’83

This recording has NEVER been released on vinyl. Having appeared in La Dolca Vita before joining The Velvet Underground in New York in the mid-60s, Nico seemed to be at the epicentre of all that was cool in the 60s. And she continued that trend by relocating to Manchester in the 80s for a career renaissance before sadly dying in 1988. This ROUGH LIVE RECORDING immortalised her performance at The Library Theatre, Manchester, in 1983. This deluxe package will include an OBI strip, single album jacket, printed inner sleeve, record labels and CRYSTAL CLEAR YELLOW VINYL.
Tracklist:
Face A
1. Vegas
2. Saeta
3. Genghis Khan
4. Janitor Of Lunacy
5. Tananore
6. Afraid
7. All Tomorrow’s Parties