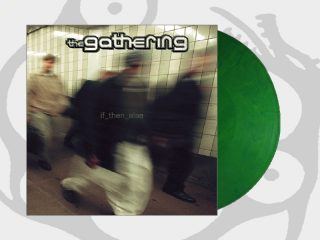 For the first time on our own label Psychonaut Records: if_then_else on vinyl.

‘if_then_else’, the 6th studio album of the Gathering follows the acclaimed How To Measure A Planet?. Engineered by Zlaya Hadzich [producer of Souvenirs] and Attie Bauw [producer of How to Measure A Planet?], the Gathering takes you this time on a rockier journey with tracks like Rollercoaster, Colorado Incident or Saturnine, but Amity or Herbal Movement will also give some moments of relaxation.

The album was recorded at the Koeienverhuurbedrijf Studio, Purmerend, and at S&K Studio, Doetinchem between January and March, 2000, under the band’s own guidance with Zlaya Hadzich as co-producer. The album was engineered by Zlaya Hadzich and Dick Kemper, mixed and mastered on Pro Tools by Attie Bauw at Bauwhaus Studio, Amsterdam in April 2000.

An excerpt of Lewis Carroll’s Alice in Wonderland is heard between “”Analog Park”” and “”Herbal Movement””.”