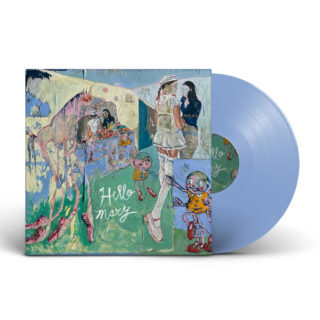 Hello Mary – which was produced by Bryce Goggin (Pavement /Luna) – references alternative rock of the nineties alongside Elliot Smith and Jeff Buckley as influences, heard most vividly on the album’s simmering closer “Burn it Out,” but their contemporaries are bands like Palberta, Spirit of the Beehive, and Palehound, artists who don’t shy from unusual time signatures, careening feedback, and unconventional harmonies, all for the sake of surprising a listener. The album’s “Looking Right Into the Sun,” a song most honestly described as “delightful,” is driven by a tight and dynamic rhythm section that gives way to Straight’s crystalline and confident falsetto.

The debut album was written during a period of immense uncertainty. “We were battling things personally, the world was battling COVID,” Wave says. So there’s a darkness to it that isn’t apparent on first listen. Yet prioritizing sensation over narrative cohesion opens up the ability to make even the most lyrically devastating songs pleasurable. On the psychedelic “Spiral,” Straight and Wave harmonize to dazzling effect on the chorus, while Oppenheimer’s driving bassline tethers them to earth. “Is it a coincidence? You’re hanging out all night, while I’m on the other side,” they sing to an unknown other. “We’re singing about the paranoia that comes along with relationships, the sense of jealousy that feels like you’re on the outside of things,” Stella says. Relatability gives way to absurdity, too, an example of which arrives in the form of “Special Treat,” which opens with disarming harmonies that might recall a schoolyard taunt, or something more sinister, like the summoning of a coven.  The earwormy “Rabbit” is, at its core, a straight ahead rock song that features one rock-star-esque guitar solo.