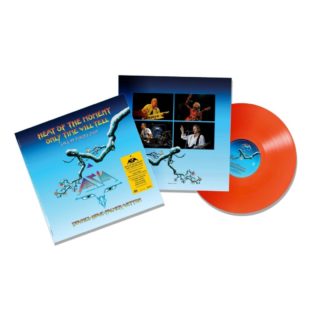 Asia are a multi-platinum selling, global superstar English rock band formed in London and celebrated their 40th anniversary in 2021.

Their 1982 self-titled debut album hit number one in several countries, with lead single “Heat of the Moment” making the top 40 in over a dozen countries, including US #4.

The band features some of the most important figures of the prog-rock scene, including Geoffrey Downes (Yes & The Buggles), Steve Howe (Yes), Greg Lake (ELP) & Carl Palmer (ELP).

This 10″ single release features two of the band’s most loved and recognizable singles: “Heat of the Moment” & “Only Time Will Tell,” recorded live from the band’s 2007 ‘Fantasia’ reunion tour and released for the first time on glorious neon orange vinyl. Original artwork from the fantastic and world renowned Roger Dean.