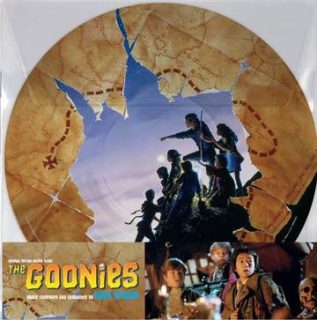 In celebration of the 35th anniversary of The Goonies, this first ever picture disc of the iconic score features the album cover on Side A and the infamous “One-Eyed Willie” on Side B. The track listing to this single disc version of the original score was personally selected and assembled by composer, David Grusin. The Goonies has remained a fan favorite since its release back in 1985 but is currently experiencing a cultural rebirth. The film is the central character in a new Fox TV show scheduled for this fall to be produced by the film’s director-producer, Richard Donner, Steven Spielberg’s Amblin and Warner Bros. studio. More recently, a Goonies reunion hosted by Josh Gad was a top 5 trending video on YouTube which has now been viewed almost 3 million times.