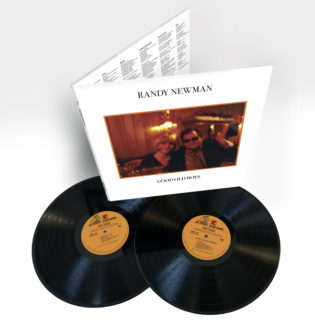 With songs that run the gamut from heartbreaking to satirical and a host of unforgettable film scores, Randy Newman has used his many talents to create musical masterpieces widely recognized by generations of audiences. After starting his songwriting career as a teenager, Newman launched into recording as a singer and pianist in 1968 with his self-titled album Randy Newman. Throughout the 1970s, 80s, and 90s he released several acclaimed albums: 12 Songs, Sail Away, Good Old Boys, Little Criminals, Born Again, Trouble in Paradise, Land of Dreams, and Bad Love.

Good Old Boys is the fourth studio album by Randy Newman, released September 10, 1974 on Reprise Records. It was Newman’s first album to obtain major commercial success, peaking at #36 on the Billboard 200. Good Old Boys was initially envisioned as a concept album about a character named Johnny Cutler, an everyman of the Deep South. Newman made a demo of these songs on February 1, 1973; they were released as the bonus disc for the 2002 CD reissue, titled Johnny Cutler’s Birthday and are now being included on vinyl for the first time in this Run Out Groove deluxe edition. As with all of Newman’s early albums, some material Newman wrote had been previously recorded by other artists. In this case, “Guilty” had been initially recorded and released by Bonnie Raitt on her 1973 album Takin’ My Time. Robert Christgau gave the album an A rating upon release, and in retrospective reviews both the 1992 edition of the Rolling Stone Album Guide and AllMusic gave it a five-star rating. In 2012, the album was ranked #394 on Rolling Stone’s list of the 500 greatest albums of all time. In 2000 it was voted #902 in Colin Larkin’s All Time Top
1000 Albums. It spent two weeks in the Top 40 of the Billboard 200 in late 1974, with an overall 21-week tenure. It also earned a gold record in the Netherlands.

In addition to his solo recordings and regular international touring, Newman began composing and scoring for films in the 1980s. The list of movies he has worked on since then includes The Natural, Awakenings, Ragtime, all four Toy Story pictures, Monsters Inc. and Monsters University, Seabiscuit, James and the Giant Peach, A Bug’s Life, and Meyerowitz Stories. Randy Newman’s many honors include 7 Grammys,® 3 Emmys,® and 2 Oscars,® as well as a star on the Hollywood Walk of Fame. He was inducted into the Songwriters Hall of Fame in 2002 and the Rock and Roll Hall of Fame in 2013—the same year he was given an Ivor Novello PRS for Music Special International Award. Newman was presented with a PEN New England Song Lyrics of Literary Excellence Award in 2014.

Side A
1 Rednecks
2 Birmingham
3 Marie
4 Mr. President (Have Pity On The Working Man)
5 Guilty
Side B
1 Louisiana 1927
2 Every Man A King (Huey P. Long)
3 Kingfish
4 Naked Man
5 A Wedding In Cherokee Country
6 Back On My Feet Again