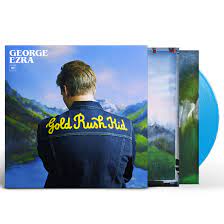 The British singer-songwriter and BRIT Award winner has already proven that George Ezra is a true “golden boy” with his first two number one albums “Wanted On Voyage” (2014) and “Staying At Tamara’s” (2018) and hits like “Budapest,” “Blame It On Me,” “Paradside” and “Shotgun.”

Twelve songs await on the record, which Ezra wrote and produced in London with longtime collaborator Joel Pott. In a press release, he describes them as “wonderful, transporting [and] uplifting.” “They all sound like me. That’s what holds them together,” it continues.

To announce “Gold Rush Kid,” he also unveiled the first single in January, the euphoric, poppy “Anyone For You,” which he describes himself as a “patchwork of lyrical ideas found in old notebooks and random moments shared between musicians in the studio.” “It’s joyful and infectious, and I can’t help but smile every time I sing it,” says Ezra.