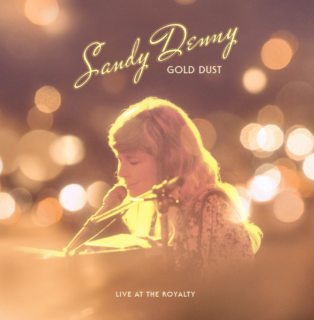 Gold Dust – Live At The Royalty

‘Gold Dust Live At The Royalty’: highlights from Sandy Denny’s final concert making its debut on vinyl. Recorded just months before her untimely death for a planned live album, this special RSD LP attempts to present the record that Sandy might have released had she lived.

‘Gold Dust Live At The Royalty’ commemorates Sandys 75th birthday year, and also marks the 43rd anniversary of her passing which falls a week before Record Store Day itself (21st April.) The concert features a career spanning set that includes songs taken from ‘Fotheringay’, Sandy’s solo albums ‘The North Star Grassman And The Ravens’, ‘Sandy’ and ‘Rendezvous’ as well as ‘Unhalfbricking’ and ‘Rising For The Moon ‘with Fairport Convention. This final performance perfectly captures the folk-rock sound with a stellar group of musicians including Trevor Lucas, Jerry Donahue, Pat Donaldson, Dave Mattacks as well as Sandy herself. ‘Gold Dust Live At The Royalty’ showcases the quality of Sandy’s songwriting throughout her career, and includes her signature composition ‘Who Knows Where The Time Goes?’ which was the first song she ever wrote, and ‘No More Sad Refrains’ which closed her final album. Remastered from the restored tapes, this release features Sandy’s spoken introductions to each song, comprehensive sleeve notes and brand-new artwork designed especially for this release.