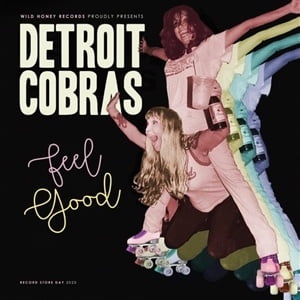 “Feel Good” by The Detroit Cobras will receive the vinyl treat. The track, originally released on digital stores on 2015, has been remastered and will be printed on a limited edition white vinyl, exclusively for Record Store Day. The vinyl will contain the track cut on the B-Side (Detroit Cobras always had a thing for B-Side, as they fans well know) while the A-Side will feature a silkscreen band logo designed by Rachel Nagy herself. The Detroit Cobras has always been a cult band, the ultimate Rocknroll regeneration machine with tons of hit singles on their pockets, for the joy of every rocknroll dj all around the world. As Rachel Nagy says: “Were releasing this track on vinyl because this is the original medium, where our true sound lies. Its a joyful track, meant to make people feeling good!” Recorded in Detroit, at Ghetto Studio, by legendary motor city producer Jim Diamond with a solid crew of veteran players such as Dale Wilson on bass, Reuben David on guitar and Richie Wohlfeil on drums. For fans of: Reigning Sound, Oblivians, The Go, White Stripes, Motown, Dirtbombs.