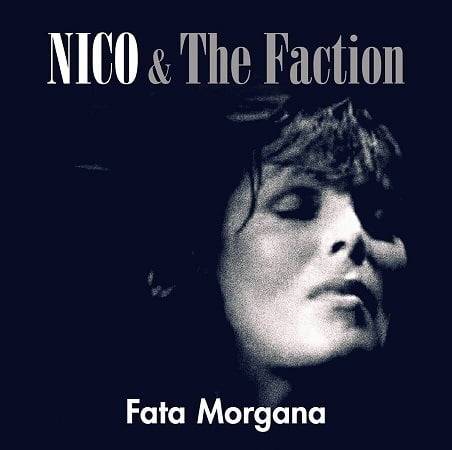 NICO & THE FACTION ‘FATA MORGANA’
NICO needs little introduction … she was a singer-songwriter, composer, model (for ‘Vogue’, ‘Elle’& ‘Coco Channel’), actress (she starred in Federico Fellini’s masterpiece ‘La Dolce Vita’) and Andy W arhol superstar in the 1960s. Collaborations were numerous and the most famous ones include those with BRIAN JONES, VELVET UNDERGROUND, SERGE GAINSBOURG, BRIAN ENO, BOB DYLAN and MARC ALMOND.

The experimental and dismal sound of her albums is considered the forerunner of the later ‘gothic’ sound. Nico was admired, cited as a major influence and paid tribute to by many musicians such as Siouxsie & the Banshees, Bauhaus, Patti Smith, Morrissey, Björk, Leonard Cohen, Henry Rollins and Marianne Faithfull.

This album documents Nico’s last ever performance held on June 6, 1988 in W est Berlin as part of the European Capital of Culture festival that year. Except for the album’s closing song (which was previously released on The End…), Nico and her backing band ‘The Faction’ composed all the pieces specifically for the show. As the title of the album indicates, the concert was Nico’s last, and the material on the album is among the last she (co-)wrote. Six weeks later, on July 18, she died while on vacation in Ibiza.

This is a stunning album. The last stand of an exceptional artist, shortly before her untimely tragic death, who lived an exceptional life overshadowed by a 15 year struggle with heroin addiction.

Originally released on CD in 1994, this is the first time this album gets a vinyl release outside of Europe. Now available as a gorgeously packaged deluxe DOUBLE vinyl edition, exclusively for Record Store Day 2017. Strictly limited to 2000 copies worldwide, this release also comes with an insert featuring extensive liner notes & background information.

Christa Päffgen aka Nico was a femme fatale extraordinaire; a woman always searching for and always running from something. She began her career as a model and actress, but soon fell in love with music. A few months prior to her untimely passing in 1988, she performed her last show with mostly new and unheard tracks, plus one classic tune from her proto-gothic album “The End” (originally released in 1974). If you are familiar with her avantgarde music you may guess what awaits youhere but you’ll be surprised by the scope and scale of this work. She had one of the most captivating and outstanding voices in the whole music scene during her active years, with an utterly dark and manic expression even while performing her vocals absolutely flawless. Supporting her unique voice perfectly, her backing band The Faction cr eated a thick carpet of pulsating melodies and rhythms, overwhelming their audience with a spacey feel and a morbid atmosphere. Peter Murphy of Bauhaus once called Nico’s albums “The Marble Index” (1968) and “The End” (1974) the first ever true gothic records and he was right. Even twenty years after her first records Nico still had this gloomy but majestic charm and the older she got, the better and more intense her music became. All in all this is one of those cult albums from the 80s dark psychedelic mus ic scene, which certainly deserves to be heard by current generations for it easily stands the test of time. Just phreakin awesome. – PICADILLY RECORDS

late live work from Nico – a set that captures her at a time when she was even moodier than ever! Nico took this strongly dark direction at the start of the 70s, and seemed to just keep on moving that way forward in her final two decades – touching on territory that most other acts wouldn’t discover until close to the time of this final concert – almost prefiguring a whole generation of goth, industrial, and experimental work – but all with this hip, unique style of her own that was always free of the cliches that would hold back so many of her later imitators. This live set from 1988 is a perfect example of her continuing genius – as Nico sings and plays organ with the same sort of brooding intensity you’d know from The End, and turns in all these eerie, watery passages that remind us of Desert Shore – in the company of a trio of additional musicians who give her plenty of room in the lead. The concert was recorded in a planetarium in Berlin – and titles include “The Sound”, “All Saint’s Night”, “You Forgot To Answer”, “I Will Be Seven”, and “The Hanging Gardens Of Semiramis”- DUSTY GROOVES

Side A
01. The Sound I
02. The Hanging Gardens Of Semiramis