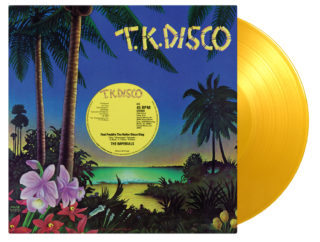 It was 1978 when New York-based producer and founding member of The Main Ingredient Tony Sylvester, approached his friend Pepé Willie to ask a favor. He needed studio musicians that could deliver fast & funky for the session to record tracks for The Imperials. Pepé introduced him to two young and multi-talented guys from Minneapolis; André Cymone and Prince Rogers Nelson. The recordings took place at the Sound Palace Studios in NYC and resulted in the fashionably titled track “Fast Freddy The Roller Disco King”.

The Imperials album never materialized, making this 12” a sought-after gem featuring Prince and André’s (uncredited) studio endeavours. The B-side contains another track, “I Just Wanna Be Your Lovin’ Man”, which originates from their 94 East Sessions. This 12” is exclusively available for RSD Black Friday as a limited edition of 1000 individually numbered copies on translucent yellow coloured vinyl, cut on 45 RPM. The vinyl is housed in the iconic TK Record replica sleeve and includes an insert with liner notes.

2. I Just Wanna Be Your Lovin’ Man