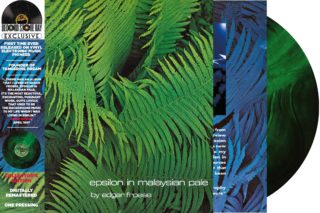 “Epsilon in Malaysian Pale” which could be described as part of the “Phaedra-Rubycon-Epsilon” trilogy, shows Froese’s impressions after the Australian Tangerine Dream concert tour, in relation to the flora and fauna there. Froese creates here a lush sonic atmosphere; the music matches the cover artwork perfectly. The music is harmonic and melodic. A sun-drenched musical landscape that is in no way inferior to the most famous Tangerine Dream albums. It was not without reason that both David Bowie and Björk named “Epsilon in Malaysian Pale” as one of their inspirations.

SIDE A
Epsilon In Malaysian Pale
SIDE B
Maroubra Bay