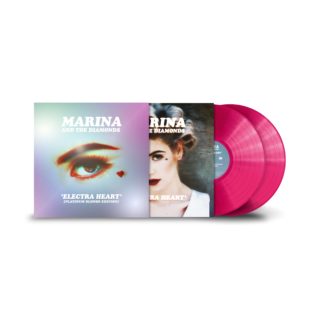 MARINA and the Diamonds

Musically, the electronic dance-pop style of ELECTRA HEART represented a departure from Marina’s debut album, 2010’s The Family Jewels, which featured a new wave sound. The new direction resonated in Europe as well as the U.S., where the album produced two platinum-certified singles – “Primadonna” and “How To Be A Heartbreaker” – and two gold-certified singles – “Teen Idle” and “Bubblegum Bitch.” The latter – which was never officially released as a single – became an unexpected hit in 2021 thanks to the song’s popularity on TikTok with over 3M unique videos created.

ELECTRA HEART: PLATINUM BLONDE EDITION includes all 12 songs from the original release. They’re joined by four additional tracks that came out after the original album. Those bonus songs include the international hit “How To Be A Heartbreaker,” “Lonely Hearts Club” from the Deluxe Edition of the album; “E.V.O.L” a free download released on Valentine’s Day 2013; and “Electra Heart,” a collaboration with American DJ Betatraxx that was featured in a music video on Marina’s YouTube channel.