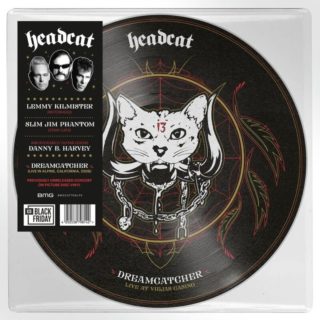 Headcat is an American rockabilly supergroup formed by vocalist/bassist Lemmy (of Motörhead), drummer Slim Jim Phantom (of The Stray Cats) and guitarist Danny B. Harvey (of Lonesome Spurs and The Rockats).

The band was formed after recording the Elvis Presley tribute album by Swing Cats A Special Tribute to Elvis in July 1999 to which the future bandmates all contributed. After recordings were finished they stayed at the studio and Lemmy picked up an acoustic guitar and started playing some of his old favorite songs by Johnny Cash, Buddy Holly, and Eddie Cochran. The rest of the guys knew them all and joined in. The name of the band was created by combining the names Motörhead, The Stray Cats, and 13 Cats, which resulted in Headcat. In 2006, the band released their first studio album on June 27, Fool’s Paradise. It included cover songs from artists such as Buddy Holly, Carl Perkins, Jimmy Reed, T-Bone Walker, Lloyd Price, Elvis Presley, and Johnny Cash. On the recordings, Lemmy played acoustic guitar. In later years, Lemmy began to use his signature Rickenbacker bass in live performances.

The band’s second studio album, Walk the Walk…Talk the Talk, was released in 2011. This was the first new material by the band in eleven years, following up from the Lemmy, Slim Jim & Danny B album in 1999. It has two original songs ‘American Beat’ and ‘Eagles Fly on Friday’. While the first album was all acoustic, the second studio was all electric with Lemmy playing bass like he did in Motörhead.

Dreamcatcher is a previously unreleased live concert which was recorded at the Dreamcatcher theatre at the Viejas Casino in Alpine CA on 1st Feb 2008. It was produced by the band and mastered by guitarist Danny B Harvey.